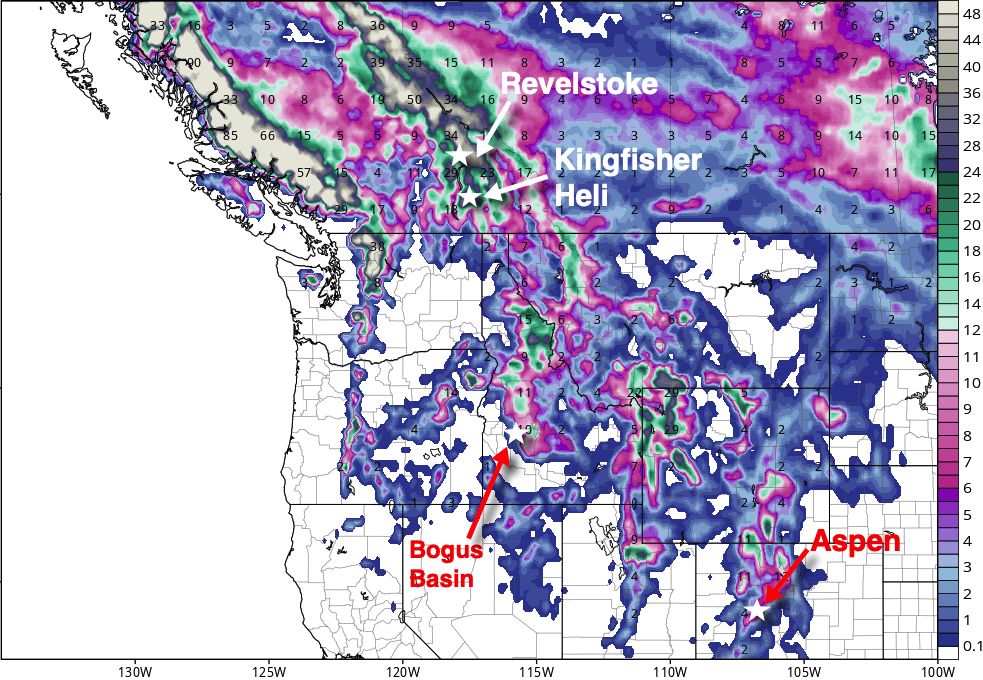 High pressure ridging dominates the western US and southwest Canada mainly by mid and late next week as the eastern US gets a turn at unsettled weather (24th of October onward for about a week). It is looking like some seriously cold air and unusual pre-Halloween snowfalls are possible in many areas of the eastern US, with snow possible even to northern Georgia and Mississippi! Around or just after Halloween, expect a shift back to unsettled for the western US, with more snow and probably colder than usual weather, early season additional accumulations for the Northwest US and Bogus basin also. Early November looks busy with storms and snow all across the western US and southwest Canada.


Expect a colder and more snowy winter for Revelstoke, Kingfisher Heli, Bogus Basin, and Aspen this season! I am thinking early openings possible again on some great early season conditions for all areas mentioned. We are in a neutral ENSO pattern (no El Nino or La Nina), leaning to La Nina this winter 2019-2020. Meteorologist/ Chris Manly

..NOW THROUGH THE WEEKEND...
Mild weather is expected through Thursday. A few light showers are possible today and Thursday, mainly well north of Interstate 80. A strong atmospheric river will impact northeast California and western Nevada Friday into Saturday, bringing periods of moderate to heavy rain, high elevation snow, gusty winds, and concerns for flooding along rivers and streams.

..MORE DETAIL...
(Translated from NWS but added in some detail and our own outlook)
A strong late season Atmospheric River (AR) will bring periods of heavy precipitation to the region Friday and Saturday. With a strong sub-tropical influence and the jet stream (cold air to the north of this) forecast to stay well north of the region during most of precipitation event. Precip will fall
primarily as rain, even in the higher elevations above 9,000 and 10,000 feet. The main concern continues to be flooding, both for small creeks and streams, and for main stem rivers. There is a flood watch in effect from late Friday afternoon through Saturday for the Sierra and the Sierra foothills.

It is late in the atmospheric river season and this AR is forecast to be solidly in the strong category, which is quite rare for this time of year. PWAT (moisture) and IVT (moisture + transport) anomalies are on the very high end of their respective scales for this time of year, and between Friday afternoon and Saturday morning, several inches of water or more will fall on thew west slopes of the Sierra Nevada.

Precipitation will begin to move into the Sierra and NE California by Thursday night with periods of light to moderate precipitation through Friday afternoon as warm advection precipitation begins to push into the Sierra. A 6-12 hour period of very heavy precipitation is expected Friday night into Saturday morning as the core of the low pressure nears the Pacific Northwest coast, bringing increased forcing to the moisture laden
environment over the Sierra. The very warm temperatures aloft will promote more efficient warm rain processes and will likely result in impressive rain rates Friday night (heavy rain and flooding likely).

Current forecast for QPF is up to around 3-4 inches along the Sierra crest with 1.5-2 inches along the immediate lee of the Sierra and 0.5-1.0 inch spilling into western Nevada. During the period of heaviest precipitation the jet stream and the cold core of the low is forecast to remain well north of the
Sierra. Very warm subtropical air is forecast to move into the area from the southwest with mid-level temperatures potentially rising to around +3C to +5C during the heaviest precipitation. This will likely push snow levels to 10,000+ to 11,000 feet later Friday through early Saturday. CM

NEXT WEEK...
Early through mid next week looks busy with storms, colder this time, with snow levels to resort bases... Moderate to heavy snow is expected Tuesday and again next Thursday (9th/ 11th), followed by some sunshine and warming. After the 15th/ 16th or so we see high pressure build in across the eastern Pacific and west US coast, with sunny skies and warming temperatures, quite spring-like. CM
Feel free to share this, but please cite credit to snowforecast.com. Thank you! CM