Kingfisher and Revelstoke in BC, Huge snow, and some sun this weekend… 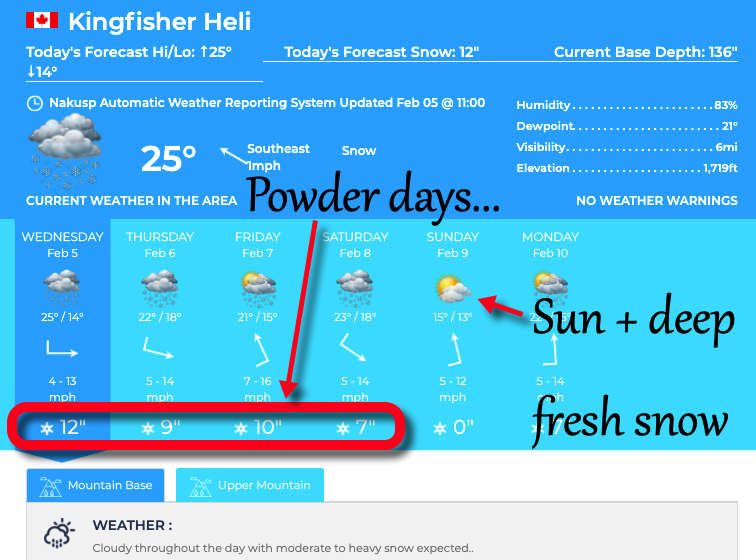 Our latest weather discussion, copy/ pasted from the custom forecast pages, loaded with a lot more info, no fees to you:

THE NEXT 2 DAYS: (this can be copy/ pasted into your website as long as it includes a credit link back to www.snowforecast.com)
Expect a high pressure ridge to build in across the eastern Pacific, with a resulting northwest flow aloft, plus strong jet stream and increased clouds/ moisture streamed across southern BC including Kingfisher Heli and Revelstoke, for snow piling up daily. By Saturday expect some awesome freshies. One caveat is that snow levels will be a slight issue on Thursday as temperatures at 5,000 feet rise to near -4c/ 27f. Heavy snow is expected Thursday, with some rain mix at the Revelstoke base. This is looking like less of an issue than previously thought.


Friday through Sunday expect a low pressure system to move in/ through, with significant/ heavy snow expected at Kingfisher and Revelstoke, and no snow level issues. On Sunday expect more sunshine and awesome fresh snow to play in... its looking epic!


Next Monday and Tuesday (10th/ 11th) expect another low pressure system to move in/ through from more out of the north, with another round of significant/ heavy snow possible for Kingfisher and Revelstoke, no snow level issues, in fact the snowfall depth will be deeper not because of the amount of moisture which will be more limited, but because of the water to snow ratio, which will be greater, causing more light and "fluffy" snow. Meteorologist/ Chris Manly.


LONG RANGE: Colder storms start moving in on and after the 10th of February which is early next week, as low pressure becomes more dominant across the region, and a more northerly flow of winds develops across the area. Many of these systems look like they may be southward bound, with colder air and mostly light to at times moderate snowfall from these systems (very much on track). Unsettled conditions persist through late February. Meteorologist/ Chris Manly.