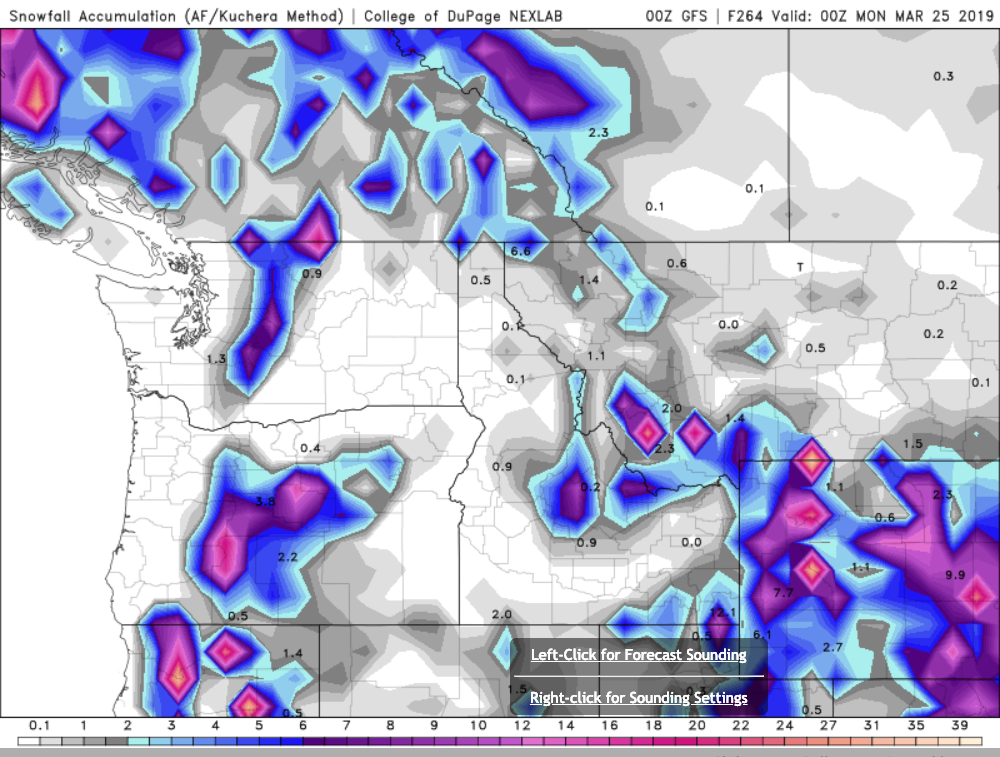 THIS WEEKEND (April 13-14): We expect moderate+ snowfall on Saturday as a fairly potent storm moves through (some powder day criteria met), Revelstoke definitely favored with the orgraphics, then lighter snow on Sunday as the low pressure system exits and leaves behind a sun and cloud mix across southern BC and Alberta.

NEXT WEEK (15th of April through the 18th): Most of next week looks like a mix of sun and clouds as high pressure ridging builds in from the south, across the Pacific Northwest of the US. Temperatures will be milder, with spring-like surface conditions for most areas of southern British Columbia and Alberta. There will be some shots of mostly light snow and higher snow levels (some base rain) mainly west (Whistler), and some snow for northern portions of BC/ AB.

Late next week and weekend (19th-21st): Some resort closing weekends in this time frame... We expect some Gulf of Alaska low pressure to carry snow into the region possibly next Friday into Saturday (April 19-20th), not looking like a very big deal as higher pressure ridging still holds on, though weakening. Overall, expect more clouds than sun to start, then more sun than clouds for Saturday and Sunday, Sunday looking like the more sunny of the 2 days.

Following week (April 22nd-26th or so): More resort closing weekends in this time frame... It seems higher pressure ridging may build strong to the south and nose in across southwest Canada, defecting storms to the north, for mostly sunny skies in this time frame being more dominant, and a chance that a low pressure system sends a wave through with some precip, mostly north and coastal BC. CM

The last days of April into May: Look like they will be busy with Gulf of Alaska storms moving through, and more snow for the backcountry guys and the hold out resorts that are still open. Most of May should be more unsettled than usual, as El Nino has this effect in spring, on the west coast of the US and Canada... More to come. CM

12 to 25cm for most resort areas, and 35 to 50 in favored higher elevations now through this weekend...